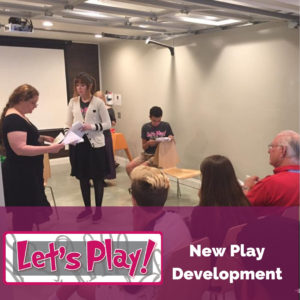 Flashback Theater loves to work on new plays. In fact, our New Play Development arm of Let’s Play! led to the world premieres of Rosies: The Women Who Riveted the Nation and Boats Against The Current. To support the new work of playwrights in our region, we host one new play workshop each summer, allowing a playwright to see their script in a rehearsal atmosphere before sending it out to production.
Sometimes that leads to a production with us, and other times it shows the playwright just what needs to be done to make the play production ready. In addition to our new play development, we host a resident playwright, giving her time and space to create plays that we want to produce and you want to see!

Are you a playwright?

Rosies: The Women Who Riveted The Nation by Amber Frangos
Workshop Dates: July 24-28, 2017