Our season of theater events includes multiple Mainstage productions as well as a Fringe Series show and a SomerStage Series show. Each offers insight to our mission of exploring the world, our past, and theater.

The Book of Will
February 16-26, 2023
Flashback Black Box
Mainstage Series

Purchasing a Flashback Theater season ticket includes 3 Mainstage shows and the Fringe show. The Somerstage series will be pay-what-you-can and we will invite season ticket holders to attend but there will not be reserved seating for that production, as it takes place in the park.

Season ticket holders will be contacted in the first week of ticket sales for each show to confirm desired date of attendance. Your tickets for each production will be sent to your email. If you would like to pick up a printed ticket to give to a friend or transfer your tickets for a production to someone else, you are welcome to do so and need only contact the box office to make arrangements. 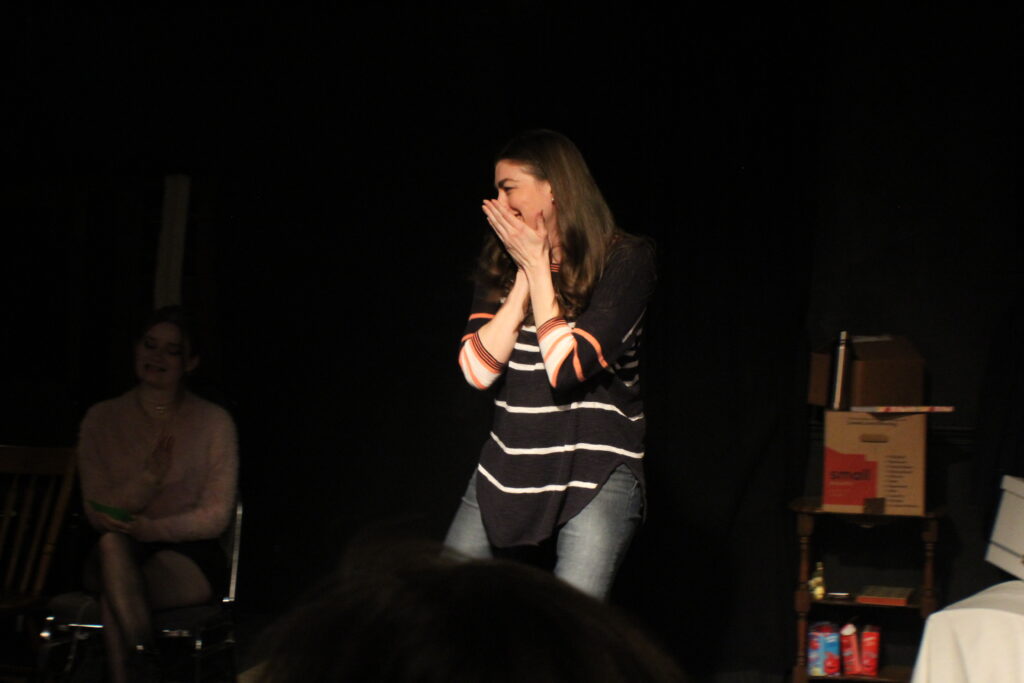 You’re six years old. Mum’s in hospital. Dad says she’s “done something stupid.” She finds it hard to be happy. So you start to make a list of everything that’s brilliant about the world. Everything that’s worth living for. 1. Ice cream. 2. Kung Fu movies. 3. Burning things. 4. Laughing so hard you shoot milk out your nose. 5. Construction cranes. 6. Me. You leave it on her pillow. You know she’s read it because she’s corrected your spelling. Soon, the list will take on a life of its own. A play about depression and the lengths we will go to for those we love.

Tickets will go on sale for Every Brilliant Thing on September 27, 2022.

Adapted by Mountain Community Theater from the novel by Valentine Davies
Based upon the Twentieth Century Fox motion picture.
Directed by Jade Ellis
December 8 – 17, 2022 at The Virginia

By chance, Kris Kringle, an old man in a retirement home, gets a job working as Santa for Macy’s. Kris unleashes waves of good will with Macy’s customers and the commercial world of New York City by referring parents to other stores to find exactly the toy their child has asked for. Seen as deluded and dangerous by Macy’s vocational counselor, who plots to have Kris shanghaied to Bellevue Psychiatric Hospital, Kris ends up in a court competency hearing. Especially at stake is one little girl’s belief in Santa.

THE BOOK OF WILL

Without William Shakespeare, we wouldn’t have literary masterpieces like Romeo and Juliet. But without Henry Condell and John Heminges, we would have lost half of Shakespeare’s plays forever! After the death of their friend and mentor, the two actors are determined to compile the First Folio and preserve the words that shaped their lives. They’ll just have to borrow, beg, and band together to get it done. Amidst the noise and color of Elizabethan London, The Book of Will finds an unforgettable true story of love, loss, and laughter, and sheds new light on a man you may think you know.

Music and Lyrics by Stephen Sondheim
Book by Hugh Wheeler
Directed by Billy Christopher Maupin
May 11 – 21, 2023

An infamous tale, Sweeney Todd, an unjustly exiled barber, returns to nineteenth century London, seeking vengeance against the lecherous judge who framed him and ravaged his young wife. The road to revenge leads Todd to Mrs. Lovett, a resourceful proprietress of a failing pie shop, above which he opens a new barber practice. Mrs. Lovett’s luck sharply shifts when Todd’s thirst for blood inspires the integration of an ingredient into her meat pies that has the people of London lining up… and the carnage has only just begun!

As You Like It follows its heroine Rosalind as she flees persecution in her uncle’s court, accompanied by her cousin Celia to find safety and, eventually, love, in the Forest of Arden. In the forest, they encounter a variety of memorable characters that change their points of view.

Sommer Schoch, the Producing Artistic Director, will announce Flashback Theater’s next season of shows during an evening of performances by local talent. The Cabaret is a celebration of all that FbTC has accomplished in the past years, it is also a chance to build excitement for what lies ahead. Between performances of local theater artists, the 2023-24 season at Flashback Theater will be announced. Audiences will get a glimpse at next season’s Mainstage productions, Fringe shows, and new projects. At the same time, the cabaret is an opportunity for local talent to stretch their performance abilities each year. Performers are encouraged to choose material that they are personally excited by and may not get to perform otherwise, which results in a unique evening of artistic expression.